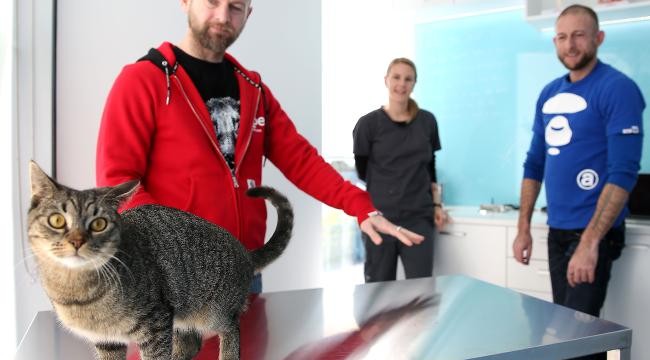 FIVE months after the fall that nearly took all of his nine lives at once, Sydney’s luckiest cat has a new home – and a new name.

Zetland couple Benjamin Wilson and Christopher Sims have taken in the little cat after following his ­adventures since Central first reported on his miraculous survival from a seven-storey fall in early March.

The kitten was found at the bottom of a Waterloo apartment tower, badly injured, bleeding and covered in maggots.

A good samaritan rushed him to the nearby My Vet Animal Hospital where the feline’s chances of survival were touch and go.

But after a number of major operations and five months of recuperation – paid for by donors from all over the world – the lucky kitten is now settling into his new home, which includes a big brother for him to play with.

Monkey won hearts during his recovery.Source:Supplied

Dubbed Seven by the vet staff in recognition of the length of his fall, Mr Wilson and Mr Sims have renamed him Monkey.

“We don’t know what his name was before the vet called him Seven but he never seemed to respond to it,” said Mr Wilson. “He is ­already starting to respond to Monkey.”

Monkey had to endure several operations.Source:Supplied

Monkey’s big test came when he was introduced to the couple’s existing cat, Max.

“We followed what happened to Seven and what surprised us was that after a while nobody seemed really interested in taking him home,” said Mr Wilson.

“We felt sad for the poor guy, he has had such a sad, short life.

“We dropped into the vet clinic just to see how he was doing and our cat Max got to meet him when he went in to have his vaccinations and their initial response to each other was really good.

“So Seven came over for a couple of play dates until we ­decided we were happy for him to say with us.

“He loves running up and down the hallway and the stairs and he is playing with his toys and Max,” he said.

“He is a little bit cheeky but that’s OK.”

GOT A QUESTION?
Ask online